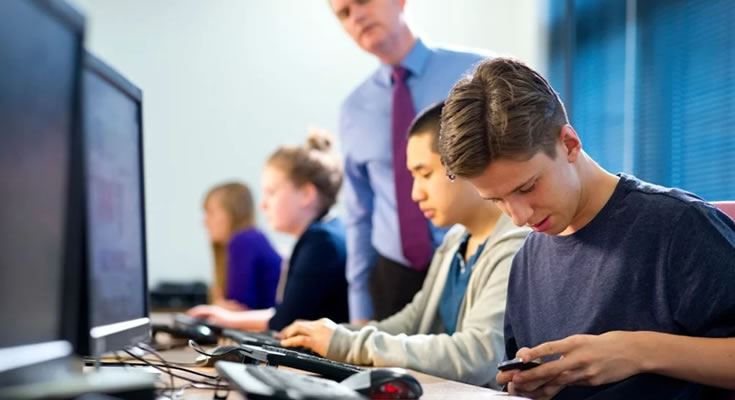 As well as the French, the Victorian and NSW governments are banning mobile phone usage in schools. While the jury’s out on how effective the measures will be, two listed minnows are eyeing the opportunities.

With the Victorian government banning primary and secondary state school kids from using mobile phones during school and with a potential national clampdown looming, two listed companies involved in students’ cyber and physical security are eyeing the potential.

Not that the companies concur on the appropriateness and likely efficacy of the measure, which emulates the NSW government’s ban on mobile use in primary schools. Both dictates are effective from 2020.

The French government has led the way globally, forcing under 15s to bid au revoir to their mobiles during school hours.

“We have long felt that mobile phones would one day be banned in schools, it was only a matter of time,” says the head of MGM Wireless (MWR, $3.23).

“The evidence is undeniable. Young kids with mobile phones are subjected to online bullying, image abuse, and stress.”

The protector of youth against internet nasties, Family Zone Cyber Safety (FZO, 21c) argues that our blessed urchins are savvy enough to bypass such restrictions and that the policy will be an almighty headache for schools to enforce.

“It’s a great headline measure but it does not solve most of the problems,” says Family Zone CEO Tim Levy.

Family Zone says while it supports ‘out of sight’ restrictions – out of sight during lessons, that is – blanket bans just don’t work. In some cases parents have led the protests – how will they be able to remind Sebastian to attend his violin lesson? – and the bans are too easily ignored by students.

And, we suspect, weary teachers.

Kids being kids, students will circumvent the bans by smuggling in devices connected to wi-fi ‘hotspots’, which circumvent the restrictions of the schools’ networks.

Family Zone claims up to half of students use ‘hot-spotting’, which is being made more economic because of unlimited data plans.

Of course, both MGM and Family Zone are not exactly impartial observers in the cyber safety debate.

MGM’s commercial interest in the subject is by way of its ‘wearables’ product Spacetalk, a watch-like device for four to 12-year-olds with a GPS tracker and mobile phone.

But the kids can only make phone calls and send text messages to a parental- approved list of contacts and the device also has a ‘school mode’ disablement feature.

Thus, MGM is confident the Spacetalks won’t be covered by the NSW or Victorian bans.

MGM as of March had sold 20,000 of the gadgets since launching them online in October 2017 and expects to have sold 44,500 by September this year.

Locally, MGM has been selling through JB Hi-Fi and Leading Edge, as well as electrical retailer,  Spark in NZ. The company expects to add more retailers to its coverage.

In May the company started selling in Britain, initially through online channels but with a view to tying up bricks-and-mortar retailers.

Meanwhile, Family Zone has launched Spotshield, an app-based tool that restricts usage to the purposes and websites allowed by a school.

The idea is that the schools subscribe for the service and force students to install the feature in devices intended to be used for education. “If a school tells (parents) to buy a green pen they will go and do it and if they tell them to use Family Zone they will as well,” Levy says.

Overall, Family Zone is used by more than 839 schools locally and in NZ and the US, covering 482,000 student licences (the school pays $7-10 per year for each student).

These schools predominantly are from the private or Catholic sector.

Via Indonesian telco Telkomsel and Woolworths’ mobile division, Family Zone is trialling a ‘freemium’ model called Family Zone Insights, which allows parents to track their kids and receive alerts if they’re using Tinder rather than a maths tuition app.

It is hoped the parents then avail of Family Zone’s standard $6 a month screening product to prevent such transgressions.

Family Zone posted receipts of $1.75m in the third (March) quarter, up 143 percent, with contract revenue of $1.14m, up 170 percent. The company claims a $6m pipeline of opportunities across five geographies.

After burning $2.7m of cash Family Zone ended the quarter with $2.1m of cash, but in April this was bolstered by a $5.5m placement at 15.5c apiece.

Family Zone reports it has signed up 130,000 wholesale (telco) accounts within six months, with 71,000 converting to paid subs.

“80 percent of our revenues are from schools and we think that will be the case for the next 12 months. Our ultimate objective is to get parents engaged and in control and the best way of doing that is through the schools,” Levy says.

“But in late 2020-21 we think that will turn on its head and most of our revenue will come from consumers (including subs generated from the telcos).”

Meanwhile, MGM Communications posted revenue of $1.4m in the traditionally quiet March quarter, up 392 percent. In the first (December) half the company turned over $4.07m for an underlying profit of $550,000 and a reported loss of $3.27m.

About half of MGM’s half-year revenue derived from the company’s legacy business of communications systems for schools, to record absences and enable SMS messages to parents. This remains a solid business but lacks the growth potential of the Spacetalks.

With a $40m market cap, MGM is noted for its tight register with a mere 12.5m shares on issue.

Investors have warmed to the Spacetalk story, with MGM shares surging from 37c in November 2017 to a high of $5.02 in November last year.

As usual, the issue is whether MGM’s sharp share re-rating captures all the potential. Fortunatow admits that at $349 a pop – plus a $5.99 per month app fee – the Spacetalks are a tad pricey. But this sticker price is expected to come down as the company’s manufacturing economies improve.

Family Zone listed in August 2016 and the stock galloped beyond $1 in October 2017. After the usual investor reality check, the company is valued at $43m.

Family Zone cites research suggesting typical youngsters get access to the internet by four and access the first device by the ripe age of six.

Don’t assume that the subversive Peppa Pig is all that they’re being corrupted by: by the time our little cherubs are eight they are likely to have accessed adult content.